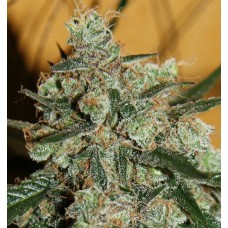 This limited release backcross has been done to bring a more even hybrid to the table. Using an F2 male we have backcrossed to a clone from the original Dog mother.

Breeders Boutique has been working with a Male Deep Blue for a while now. Jake as he is called is a very typical heavy skunk based phenotype of Deep Blue. The Deep Blue is a combination of two of the less known Clone only's in the UK growing scene. namely the Livers (or Blues as it is known locally in Sheffield) and the Exodus Psychosis. This was originally combined with the Deep Purple male to give us the Deep Blue which has subsequently been worked into an F4. Jake Blues is one of the F2 Male pheno's of the Deep Blue and delivers both the strength and the yield of the clone onlys. This crossed with the knock out effect of the DOG with it's combination of kush and chem flavours produces flowers that will have even the strongest believers of the UK clone only's wanting more of this beautiful hybrid plant.

The mother of the F2 is pictured in the description. It produces medium to high growing plants with extremely dark green folliage with a distinct hint of blue coming through. The male even more so with its' blue tinted fans. Stretch is pretty low on this with tight node spacing producing dense and solid colas. The Deep Blue likes to feed and can take high dosages if given them. It also excels in an organic environment as well. Pictures shown are all organic grows.

A really intense sweetness is produced in the final product. The hit is heavy and stoney and the taste moorish and classically kush, with dank undertones running below the sweet herb flavour.

The Breeder has given us a pre release on this and because of the love we have for F2's we are giving people an opportunity to experience the different phenotypes in this excellent Blue Pit indica hybrid.


Your Review: Note: HTML is not translated!

Enter the code in the box below: